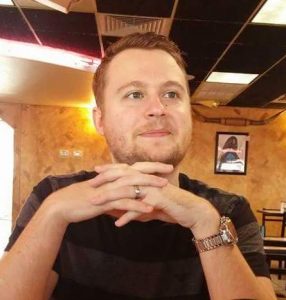 Obituary via www.myersfuneralhome.biz/notices/BenjaminBen-Renick. Donations may be made below.

Blue-Brich “Ben” Renick, 29, of New Florence, Missouri, tragically lost his life on Thursday, June 8, 2017 at his place of business in New Florence, leaving behind his wife, Lynlee and two children, Matty and Emma.

A Celebration of Life Service will be held at a later date.

Ben was born on August 4, 1987, in St. Louis, Missouri, a son of Frank James and Charlene Marie (Kemmish) Renick.

He was a 2006 graduate of Montgomery County R-II High School.

On April 13, 2014, in St. Charles, Missouri, he married Lynlee Jo Gallatin.  They have lived all of their married life at their current address and Ben had lived all of his life there.

Ben was a self-employed owner/operator of Renick Reptiles, Inc., a nationwide reptile breeding facility in New Florence, specializing in the selective breeding of designer pythons.  He had been an avid reptile enthusiast since a young age.

He enjoyed playing the drums and liked collecting horror movie props.  More than anything, Ben’s life was about his family and he cherished the time he spent with his wife and children.

He was preceded in death by his parents, Frank and Charlene Renick and mother-in-law, Brenda Lee Gallatin

Arrangements are under the direction of the Myers Funeral Home in Wellsville.

Use the form below or you may also mail checks made out to USARK to:

Special thanks to the vendors and everyone who attended the Tri-State Reptile Expo, helping raise this money for USARK.

Attn: Phil Goss; Josh Baity shared the 19 page Chondro Owners Manual with me and requested I donate to you. I couldn't possibly agree more with this request.

Special thanks to the vendor's and everyone who attended the Tri-State Reptile Expo. Helping raise this money for USARK

My condolences to the Renick family. May God put His arms around you all and bring justice and peace to you.

Thank you for all that you do!

Donation by The Rev. Heather McCain

At New Horizons United Methodist Church, we are praying for Ben's family in their time of grief. We trust the Holy Spirit of God will comfort the whole family. Please let me know whether there is any way I or the church may help or be of service at this time.

Thanks so much for your hard work and dedication. Great win on the Lacey Act! You've made it one step easier for small business and herpers alike to thrive!

Thank you for your work on the salamander ban.

I am involved in the reticulated python hobby/business with a company called Slither Inc. out of Durham, NC. Reptiles are a lifelong passion of mine and I hope to see it continue.

Keep our reptiles SAFE and remove them off the Lacey Act. I'm sorry it's not much.. But I will continue to donate if I have extra money to give, we need you to help our reptiles stay safe.